Day Ten: Take back your body

Ok, so I’m starting to wonder if honesty really is the best policy. Will I ever get a job again after being so open on this blog, or a boyfriend for that matter? So, if a potential employee (oops - meant to write employer!) ends up reading this, I’d just like to say I’m a really good worker. I'm very professional and I'm a perfectionist, which will work in your favour, even if it’s at my cost. And if you’re a potential suitor, at least you know what you're letting yourself in for, and I can safely say I'm a lot saner than I used to be!


I admit, though, that I have wandered a little off topic at times on this blog so I'm meandering back today to the subject of body image and self-acceptance. As I write, the Endangered Species women summit is going on over in New York, organised by the Women’s Therapy Centre Institute. Its catchphrase or rallying cry is 'Take back your body' and its goal is to encourage a new visual culture - in fashion, the media and elsewhere - that embraces all shapes, sizes and skin tones, instead of setting unattainable standards. I went to the London version of the summit on March 4th where I met politicians, psychotherapists, educators and campaigners who are all trying to challenge a culture that's contributing to a rise in self-hate, negative self-talk, eating disorders and other harmful behaviours. That experience was one of the things that prompted me to give up negative thoughts about my body and appearance for Lent and to write this blog. If you want to hear more about the New York summit and why it's important, watch this two-minute video of New York therapist Caren Shapiro:

I'll be writing more about the Endangered Species summits and about some of the other organisations and individuals involved in them in the coming days. While on the topic of body, though, I'll just mention a magazine I came across this week. It's called BEAUTIFUL and, to quote its website, it's "the UK's only intelligent glossy lifestyle magazine for curvy women". I love the blurb on the front cover of its latest issue: Your country needs your curves. The magazine only features images of women who are a UK size 12 or over, also known as "plus-size" models. Check out the magazine's website for more information and media articles about its launch in September last year.

To finish, an addendum to yesterday's post on loneliness. I have the impression, although I may be wrong, that everyone feels lonely now and again, even if you are in a relationship or are surrounded by children. I think it's part of the human condition (without getting too deep!). These days, I try to fill those moments of loneliness with healthy activities that nourish my soul - prayer, meditation and getting out into nature. I certainly didn't feel lonely sat on the top of Conwy Mountain in glorious sunshine on Friday morning, despite the fact there was no one else around. That was blissful solitude. So I'll end with another photo from Conwy Mountain, taken on Wednesday. The sun wasn't out that day, but the wild ponies were. 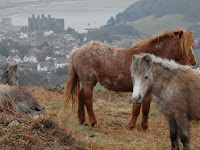 Posted by Katherine Baldwin at 08:19