Before we get started, a confession or two. I made a few modifications early this morning to last night's post "From forty with love", which has prompted me to do a bit of research into blogging ethics. As you might imagine, regulation and the blogosphere don't really go together and there seems to be a big debate going on out there on this topic. Numerous bloggers have come up with suggested codes of practice while others propose that each blogger publish their own code. As a novice, it would have been a good idea to do my research into the dos and don'ts of blogging before I started but better late than never. So after modifying last night's blog (thinking it was posted so late that noone would have read it, but then forgetting that not all my readers live in my time zone) I realised that wasn't ethical or transparent. I was about to go back to try and reinstate what I'd removed or change back what I'd changed but I was getting into a tizz trying to remember the exact wording so I thought I'd just come clean here about what I changed, forgive myself and hope my readers will accept my apologies. Of course, as a perfectionist and a pedant when it comes to spelling and grammar, this is all a little disconcerting. I guess it's not Ok either to go back and correct grammatical errors once they're posted , which means I'm either going to have to go through my writing with the eyes of a hawk or live with a grammatical error or spelling mistake associated with my name! It's so easy to make little errors, even with a spell check. But I guess, in line with the title and purpose of this blog, I'm going to have to live with imperfection. This topic reminds me of that sinking feeling I would sometimes get when working as a journalist at Reuters when I'd read back through a story that had just been posted on the global wire and find a spelling mistake or a factual error. It was so tempting to plead with the editor to resend the story as a 'rewrite' and try to disguise the mistake but, more often than not, it had to be sent out again as a correction, with CORRECTION in glaring capital letters tagged to the headline. Oh how humiliating that was. But just like the process of coming to accept the way I look, the practice of accepting grammatical imperfections, however painful, is going to be good for me.

So to my corrections. Firstly, I renamed yesterday's blog 'Birthday blog' rather than Day Five. As I noted yesterday, Lent has 46 days but the six Sundays aren't counted because they are feast days, each representing a mini Easter. So if I'd counted yesterday as Day Five and continued to count the Sundays, my final entry would be Day 46. That would have left me a little bemused and perhaps some of my readers too. I'd be asking, 'whatever happened to the 40 days of Lent?' And I might even have to change my Twitter name again to '@Just_AsIAm46' and I really couldn't cope with that! It would add six years to my life. So I won't be counting the Sundays from now on, and probably won't be blogging on the Sundays either. It'll be my day of rest. I wish I'd thought of that last night when I decided I really ought to post something on my birthday! Hindsight is a wonderful and sometimes very annoying thing.

So the other correction is rather amusing. I included in yesterday's post a quote by writer Kathy Lette that a friend had written in a birthday card: 'Age to women is like Kryptonite to Superman' adding that, in which case, I'm really looking forward to the next decade. Now, maybe to some that sounds like my Liverpudlian sarcasm but at the time I wrote it, I was actually thinking that Kryptonite was something that empowers Superman, a sort of Gatorade or goji berry for super heroes. This morning, however, it came to me in a flash that Kryptonite - mineral debris from the planet Krypton - has the opposite effect on Superman. To quote Wikipedia, it nullifies Superman's powers and immobilises him with pain and nausea. Prolonged exposure will eventually kill him.

So this morning I removed (apologies again!) those few lines from yesterday's blog after realising that I really didn't agree with the sentiment of that quote. And I've just checked with my friend who wrote it in the card - she also thought Kryptonite empowered Superman and had thought the quote was uplifting. We had a good laugh about that. Looks like we both need to read up on our super heroes! Now, while I accept that prolonged exposure to age will eventually kill us, I don't agree that age - at least in moderation - nullifies women's powers. In fact, I feel so much stronger - mentally and emotionally that is - at 40 than I ever did before. I feel so much more empowered and so much happier with myself today than in my 20s or 30s. In fact, spending time this weekend with friends I met at university 22 years ago brought back memories of some of the good and bad times of that era of my life - most of the bad times associated with my weight, looks or self esteem.

Recently, I discovered some old photos in a box in my brother's garage. I found one very difficult to look at. I was rowing in a women's college race, pulling hard on the oar. I must have been almost two stone heavier than I am now - that's about 13 kilos for our metric friends - and in my opinion, I wasn't a pretty sight. In fact, I find that photo very painful to look at. Now, I think it's fabulous that there are women (and men) out there who can love themselves whatever size or shape they are and that's my endeavour over this Lent period. But looking at that photo, I'm reminded how unhappy I was with the way I looked back then and how I had got to that size: through binge-eating and binge-drinking. Some of my girlfriends were also larger at university than they are today and we certainly did consume a lot of beer (how did I ever drink seven pints of lager?) but much of the time I was at uni, I was overeating and mostly in secret. While I had fabulous friends, my layer of fat kept me away from boyfriends pretty much until my final year when I had slimmed down a little. But the obsession had not gone away. I remember getting on the scales every morning of my final exams despite having been up most of the night studying. And I probably got on them more than once, hoping that if I hopped off and hopped back on again I'd be a pound lighter. I'm pondering right now whether I'll have the courage to post any photos from my larger days during the course of this blog. Maybe. Maybe it'd help someone to see them. That would be the ultimate challenge to my obsession with only publicising photos of me in which I think I look thin.

I'm pleased to say that, although I still own bathroom scales (I think it might be time to throw them out - again), I didn't go on them yesterday, despite the temptation to record my weight on my 40th birthday. Is this sounding like Bridget Jones again?

So confession over. I think I'll be back later with another little blog as I had other topics in mind for today, but I wanted to confess my corrections as soon as I could. 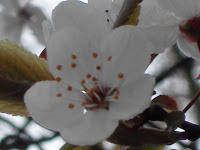 Before I sign off here, a quick note on flowers. I wandered through my local park yesterday on the way back from a lovely lunch. I felt drawn to photograph some of the flowers. Now, stopping to observe natural beauty might be normal practice for most people but I feel there was a large period of my life when I was moving at such a pace that I didn't even glance at flowers, never mind stop to smell them. This has changed in the past few years and I'm pleased to say the cherry blossom smelt lovely yesterday.

Posted by Katherine Baldwin at 03:45